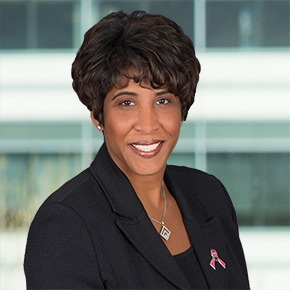 Jenell R. Ross is the President of the Bob Ross Auto Group in Centerville, Ohio, a position she has held since 2010. The company’s Mercedes-Benz dealership is the first African American-owned Mercedes dealership in the world, and Ms. Ross is the sole second-generation African American female automobile dealer in the country. The company also represents the Buick and GMC brands. Jenell not only serves the dealership’s customers but the community in general, sitting on many civic boards and committees. She is currently a member of the University of Dayton Board of Trustees and the chair of the board of directors of the Federal Reserve Board of Cleveland (Cincinnati branch). A charity close to her heart is The Norma J. Ross Foundation, in honor of her late mother, which supports underserved women affected by breast cancer. Jenell earned her bachelor’s degree from Emory University in Atlanta. She is an avid golfer and swimmer and enjoys traveling.